CNN Whistleblower EXPOSES Hard Proof Of Networks Anti-Trump Bias, Project Veritas Reports. James O’Keefe of Project Veritas has released a new expose this time on CNN. A whistleblower who has worked with the company for over two years agreed to secretly film in order to expose the bias against the President and conservatives.

In the expose we can see several employees discussing their disdain and concerns over CNN’s political bias, violation of journalist integrity, and obsession with trump.

While many of us knew that CNN was biased for obvious reasons they continue to deny that they are anything but objective reporters. But in the video hard proof exposes Jeff Zucker, the president of CNN claiming that a legitimate report from Politico is fake news.

These outlets are consuming their own biased spin to the point of thinking their own actually reporting is fake news. This results in an even more twisted and broken world view.

Democrats and the far left, being more likely to trust media, end up with the same warped view of reality.
That is not to say republicans and conservatives don’t end up believing fake news too, it just means that those who rely on large news institutions are increasingly being fed fake news.

In the end we see that CNN is not just driven by ratings but also the ideological drive and perhaps guilt of helping to create Trump by giving him non stop press. But sadly we see the result, the obsession continues much to the chagrin of CNN’s own employees

Make sure to subscribe for more travel, news, opinion, and documentary with Tim Pool everyday.

IM MAD AS HELL AND IM NOT GOING TO TAKE IT ANYMORE!!!

It's official. CNN is FAKE NEWS!

I have to say that you, a guy sitting in his living room yelling at a camera, Tim have more journalistic integrity then all of MSM combined.

Almost as bad as people having Jew Derangement Syndrome

It has always been the job of the citizen to be the journalist.

This is sick. These employees can’t even speak out. The truth is Zucker’s biggest enemy…

At one time Walter Cronkite was the most trusted person in the country.

I would love for a large number of employees to just stop, turn the cameras around and walk out the door. Stand out front with signs saying we want to report real news again.

So they basically showed us what we all already know…this is so transparent, this is so obvious. And yet it happens, because left has the power. They abuse it, but they still have it…

I prefer journalists to be polite when they challenge public figures. Journalists behave hostile in 2 ways that I can think of. Sometimes they will speak in a condescending tone like somehow they think I want them to display contempt for the bad conduct of public figures. They will also ask “gotcha” questions. These are questions that shouldn’t matter to the news consumer but the question is embarrassing to answer. When journalists behave in these hostile ways, it undermines my trust in the media. Their job is not to punish unlikable public figures. The journalists should leave that to me.… Read more »

What helps me is every claim the media makes, I believe the exact opposite.

I think Zucker and the majority of his chosen tribe in the media are most likely motivated by a racial supremacist prophecy, and are using their control of the flow of information to help fulfil it—not the profit motive! After all, CNN has barely any viewers, so it’s clearly personal.

CNN insults us while they lie to us. Alternative media is the only way to get the news. Thanks for doing a great job.

First piece of information that came out of the cnn building in a decade that wasnt a lie. Other than the other project veritas video.

When we self censor the Democratic Socialist party has achieved its goal. Silence the opposition and only allow state propaganda.

Sorry about the multiple posts. Wanna really "go down the rabbit hole" ? Imagine if CNN head honcho actually was a Trump Supporter and it was just a blinding light show (pay no attention to the man behind the curtain). ??

A healthy dose of skepticism is good for "digesting" news. I think the phrase "wagging the dog" fits perfectly

It's all about the money and the sharks are all about it. Stay true Tim Pool

Well Tim Pool, I disagreee with a lot of your opinions.

But I think you're honest, and that's why you're my Official Left-Leaning News Source(tm).
Cheers

Jesus Christ Tim never watched They Live. Four year old me learned so much having seen that.

U kids act like this all something new there all the same CNN,FOX ALL OF THEM THIS WAS HAPPENING B 4 U WERE BORN HOW THINK TRUMP NEW NOTHING NEW ALL THE SAME

Thank you for your reporting, Tim.

Back in 1992, a TV Guide was titled FAKE NEWS. About Video News Releases (VNR's) Google it! 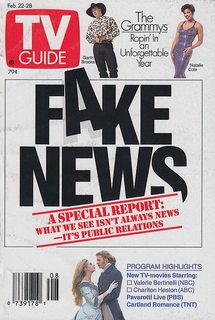 There is a name for what the Major media outlets are doing. It is called YELLOW JOURNALISM!! For you millenials, google it!

HELP US KEEP THIS RUNNING: